Biopla materials are certified "biodegradable and compostable" under the EN13432 and EN14995 standards for Europe and under the ASTM D-6400 standard for the United States.

Compostable plastic materials must have the following characteristics:

Biodegradability meaning a material’s capacity to be converted into carbon dioxide (CO2) through the action of microorganisms, under the same process occurring in natural waste. Disintegrate ability, namely fragmentation and invisibility in the final compost (absence of visual contamination). Absence of negative effects on the composting process. Almost complete absence of heavy metals and the absence of negative effects on compost quality. Each of these requirements must be met simultaneously for a material to be defined as compostable. For example, biodegradable material is not necessarily compostable because it must also disintegrate during the composting cycle. On the other hand, a material that disintegrates into microscopic particles during a composting cycle is not compostable if these parts are not totally biodegradable. ASTM 6400 and Standard EN 13432 is a harmonized technical standard, meaning it has been published in the Official Gazette of the US and European Community and must therefore be implemented in Europe by national standardization bodies. In addition, materials that comply with this standard are presumed to comply with European Directive 94/62/EC on packaging and packaging waste.

At present terms such as biodegradation, biodegradable materials and compost ability are very common but are frequently misused, giving rise to misunderstandings.
This problem was resolved by European Standard EU 13432 “Requirements for packaging recoverable through composting and biodegradation” Test scheme and evaluation criteria for the final acceptance of packaging”, which was adopted in European as EN 13432. It defines the characteristics that a material must possess in order to be considered “compostable”, namely that it can be recycled through organic recovery (composting and anaerobic digestion). This standard applies to plastic packaging and lignocelluloses materials. The standard excludes plastic materials not used as packaging, such as plastics used in agriculture or bags for waste collection, which are covered by Standard UNI EN 14995. From a technical perspective it is identical to UNI EN 13432, but it can cover a wider range of applications other than packaging. The technical content of the two standards is identical, meaning that any plastic material that complies with UNI EN 13432 also complies with UNI EN 14995, and vice versa. Both standards are the most important technical references for manufacturers of materials, public authorities composters, certifying bodies and consumers. 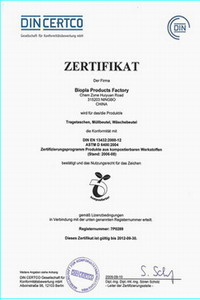